That’s it. I am done. Officially done.

I am no longer referring to him as “Jim from The Office”.

John Krasinski has earned bonified Hollywood star status at this point. Did he already have it – yup. But shaking the moniker of an iconic TV character, a comedic one at that, can be difficult. After A Quiet Place and these two seasons of playing John Clancys Jack Ryan, Krasinski has fully accomplished it.

Season Two of Jack Ryan takes place not too long after Season One. Jack is now a teacher and owns a nice desk job working for the government. It isn’t until he and his best pal from back in the day go on a little adventure together before he gets into trouble. Oh, his best friend by the way happens to be a US Senator – Senator Moreno (Benito Martinez), no big deal.

They’re looking into some information about a possible world conflict that could come to a head down in Venezuela. Senator Moreno has connections there so it’s time for a road trip. Now wouldn’t you know it that Ryans old partner Jim Greer (Wendell Pierce) just happens to have transferred from his top of the line post in Moscow down to Venezuela because he too is investigating a situation. What a crazy coincidence?!? 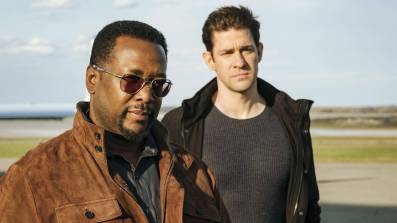 Now that the band is back together the mayhem can ensue. We add in Noomi Repace and Michael Kelly as fantastic secondary characters who decide to steal almost every scene each of them is in. I do hope the edge of your couch is comfortable because you’ll be spending the majority of these eight episodes right there.

Krasinski and Pierce both take their characters to an nextlevel. Emotional loss, health issues, trust issues and a drive to win-the-day no matter the cost pushes each character to the limit. Repace plays the mysterious never-to-be-trusted who’s-side-is-she-on accomplice as well as the female lead for the entire season. Nobody is winning an Emmy here but it’s still an added bonus to an obvious action show.

I truly enjoyed this season. It is action packed and full of intrigue. A political agenda that wasn’t overcomplicated and requiring you to have a PolySci degree to get why we’re mad at the bad guy. A few twists and turns that were appreciated and not overly predictable. Plus we didn’t go back to the villain being from the Middle East…again.

My biggest complaint about Season One was the forced love story between Ryan and Cathy Mueller (Abby Cornish). This season that storyline is long gone. A very James Bond esque move and I loved it. We’re not there to talk to girls, we’re there to kill bad guys! Don’t worry, in even more James Bond style there’s still a romance or two along the way but don’t expect any of them to last more than an episode let alone a season.

I’m not getting spoilery here because I really enjoyed this season and you need to watch it for yourself. I will have a spoil filled additional review on Patreon released later this week!

Jack Ryan Season Two is a must watch. Turn off your brain just a bit to enjoy the action and fast pace, but don’t turn it all the way off so you can keep up with the motive by the villains. Krasinski and Pierce are great. Kelly and Repace steal scenery while the return of Hoogenakker might make you cry. I implore Season Three to be the same style storyline. I’m ready for it to start now!