Season five has finally come to Netflix here in America and it was well worth the wait!

Cillian Murphy is back as Thomas Shelby, the leader of the Peaky Blinders and now a legit member of Parliament. It is 1929 and the stock market crash in America is even being felt across the pond in London. Michael (Finn Cole) made a mistake against the families instructions and lost a huge amount of money. This sets the stage for the Shelby and Grey clan to regroup and bring things back home, including Michael.

A new adversary reveals himself in Oswald Mosley (Sam Claflin). A fellow member of Parliament he has big plans and changes for England on his mind. He wants to recruit Tommy Shelby to join him in the quest for a new party to take hold of the government and the people.

In previous seasons the Shelby family has mainly needed to deal with violent conflicts. Last season saw them pitted against the vengeance seeking Luca Changretta (Adrien Brody), who ranks very high as one of my all-time favorite TV villains. I truly wish he had gotten a second season. But Mosley is more after the minds of the people of England and he will use the Shelby power and influence to help him get it. Oh, don’t worry. There is plenty of violence to go around. There is even a direct reference to the Blinders keeping razor blades in their caps during an episode. Which was usually an unspoken bit of knowledge to this point. Ok, so the gentlemen that found out the hard way probably spoke about it. That’s neither here nor there. 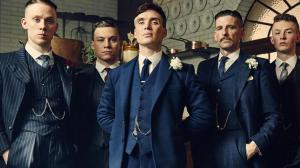 Since the villain of the season is going more for a mental attack naturally it weighs heavily on the family, especially Tommy. At times we see him close to breaking down completely. The one guy who’s always in control is finally losing it? Tommy has also been seeing Grace (Annabelle Wallis) in his dreams and medicine induced hallucinations. She’s truly not helping matters by continuously calling him ‘home’.

The cinematography of Season five goes unmatched by any other up until this point. Watch this season a second time and now only focus on the background in each scene. The streets and scenery and city life all tell a story of their own while playing into the plot developing in the foreground. As Tommy goes deeper into a rabbit hole of breaking down we hear his breathing getting deeper and deeper as well. He may not have a break down after all, he may just end things and be with Grace.

My favorite character remains Arthur. Paul Anderson plays him brilliantly and steals absolutely every scene he’s in. The arc that his character has scene from Season one until now has been gritty, angry, painful and continuously evolving. This season alone see’s his wife Linda take a bit of a turn and decided Arthur deserves more and so does she. She becomes so fed up with the family dynamic that she leaves. When Arthur finds out she made a new friend who is male…well, he handles it in true Arthur fashion. PEAKY f*ckin BLINDERS!

Polly (Helen McCrory) and Ada get a little lost in the shuffle this season. A bit 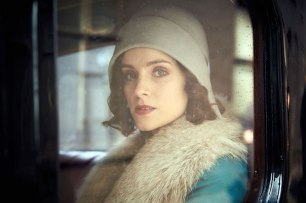 disappointing as I’m a Sophie Rundle fan.. But with so many story-lines and new characters developing that tends to happen. Michael bringing along his head strong sassy new wife Gina (Anna Taylor-Joy) from America certainly mixes things up. I promise there is plenty for them to do next season and I think both Polly and Ada will have a role.

It is a bittersweet credit to a show when the moment it ends you instantly want the next season to begin. I desperately want Season six to be released today. I am currently looking at real estate rental properties in London so when Season six gets released to NetflixUK five weeks before it does in America, I can watch! Most shows these days will wrap up neatly and solve all the drama created that season while giving you a cute cliffhanger to remind you to come back next year. Nope! Not Peaky season five. Without giving away the ending I’ll say I loved that this show does not wrap up nice and cute!