When the first film came out it quickly defied my personal tastes in genre. Never the biggest horror film fan; I actually really enjoyed it. It focused on the kids and their character development. It was a story about The Losers and how they came together to be a great group of friends and defeat the evil of Pennywise. That film ended showing a progression of maturity and a glimpse into moving forward.

As we heard the news for IT Chapter Two the excitement grew. It was going to be about that maturity and The Losers all grown up. The casting announcements came and even more excitement! Each and every one of them was perfect. The only question came when the run time was announced. Two hours and forty nine minutes for a horror movie? Huh? That seems lengthy.

So to the film we go.

They chose to use not only on the adult version of The Losers but also them as kids…again. This movie became a movie and a half. There’s a current timeline following the adults as they once again battle Pennywise, accompanied by what could have been a vignette of a film flash-backing to the kids that could have been a bonus short film on the Blue-Ray. But, here’s where we found that projected run time.

These flashbacks ruined it for me. It continuously not only took me out of the story-line I wanted to follow, but it also made me feel the first film sold me a false plot with these scenes that had been ‘left out’. In the first film I thought I was told a complete story, yet here we’re told that there were many more moments we missed out on. A bit confusing.

The adult Losers have all gone their separate ways. Each of them lives in a different part of the country and each are pretty darn successful. Only Mike stayed behind in Derry which was odd since he was the only one as a kid with a vision of leaving the town and moving to Florida. Either way, he notices that Pennywise has returned and needs the Losers to come home and fight. If The Losers could regroup and band together maybe Pennywise can be vanquished once and for all. The scene when Pennywise makes his re-appearance has come under some scrutiny and I wanted to note that I can’t see why. To me this scene was here simply to remind you of the evil that persists in the town of Derry. The presence of Pennywise creates a town-wide villainy that encompasses more than just the shape-shifting alien. Wait…Alien? Yup. We get a bit of a Pennywise backstory and it turns out he’s an alien. More on that to come.

The Losers all return, save for Stanely who decided to kill himself the moment Mike called him and invited him back home. The team learns that many moons ago Pennywise landed here and Native Americans performed rituals to stop him but failed. Now the Losers shall perform such ritual and once and for all defeat the monster. Just in case you haven’t seen the film I’ll save any further plot points. Although fighting the bully by bullying him in the end was an interesting choice in 2019. 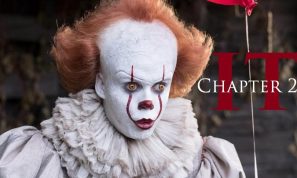 I can buy the newly introduced premise. A little bit of odd backstory t

hat actually had me wanting to see an IT: The  Prequel starring Bill Skarsgard when he was human and before the alien possessed him.

The CGI had its moments but overall I feel it fell flat. Random creatures coming out of fortune cookies, naked Grandma and over-sized spider Pennywise all looked less than stellar. The saving grace was Penywise himself and the subtle shifts and changes in his face and appearance. Keeping it simpler looked better and scarier. 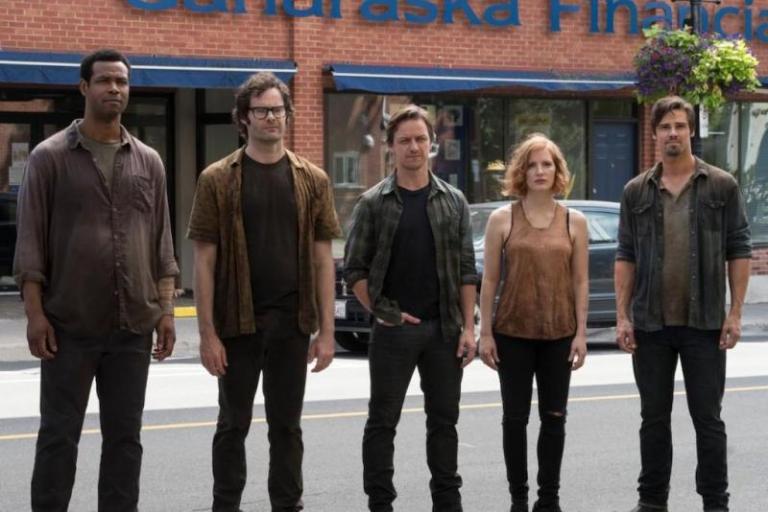 The clear cut winner of this movie was the casting. If the Academy Awards wanted an inaugural Best Casting Director category this year, give it directly to Rich Delia! The adult versions of The Losers club were spot on for each and every character. Bill Hader, who played adult Richie stole the show with the best overall performance followed by Isaiah Mustafa who played adult Mike. If you’re thinking ‘Really? Mike didn’t do a whole lot. Why him?” Just know that Isaiah Mustafa also plays the Old Spice Guy. Yep, makes you respect his acting ability just a bit more.

Bottom line. The movie isn’t bad, just a little disappointing. It felt like they threw way too much in here that kept holding back the film from being great. I’ll watch anything that James McAvoy is in. He’s arguably Hollywood’s most talented actor right now. Jessica Chastain, Jay Ryan and James Ransone round out a stellar cast. If you truly enjoyed the first film and have any interest in this one – go see it. If you want to wait though until its out on Blu-Ray/DVD, I won’t blame you.