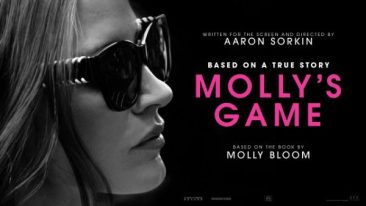 Based on the book written by Molly Bloom about her real life experiences of running high stakes poker games with celebrities, professional athletes and even the mob.

After a solid career as a screenwriter for TV and film, Aaron Sorkin has decided to make his directorial debut in 2017 with Molly’s Game. He also wrote the screenplay, as one would hope and expect. The film stars Jessica Chastain as Bloom, a former competitive skier who wound up running poker games for the Hollywood (and New York) elite over the course of about a decade, eventually winding up in the middle of a FBI investigation because some of her clients were part of the Russian mob.

The story jumps back and forth between the “present,” during which time Bloom is arrested and has to go through the legal proceedings that follow—alongside a reluctant lawyer (Idris Elba)—and the past, which details all the time in her life leading up to that point. We see some of her childhood, where her father (Kevin Costner) pushed her to be the best she could; her skiing career which got cut shot by injuries; a move to LA which wasn’t initially very glamorous and her running of the poker games. Eventually becoming one of the most exclusive and high stakes of all the poker rooms in any given city. 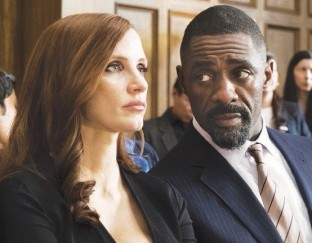 Molly has incorruptible (in some aspects) morals, which makes the potential court case interesting. She doesn’t want to give out the names of her clients—and won’t do so willingly—and therefore won’t strike a plea deal. She also doesn’t think she did anything wrong, and especially nothing wrong enough to warrant jail time. She didn’t know her clients were part of the mob; they were just poker players. Anyone like myself he enjoys poker can empathize with her on this point.

This roller-coaster of a story takes a lot of different turns and sometimes does so at a relatively high-speed. It’s a fantastic story that will keep your interest from start to finish. I understand why it was made into a film and am glad it was. Seeing how she got involved initially to learning the basics of poker to building a legit empire was more than intriguing. I will add though that my love of poker playing did help my interest level. Folks who may not be huge poker fans might not find themselves going all in. The movie does leave you begging to know just exactly who the main poker players are. Bloom in her book and now Sorkin in this film keep the actual identities of the Hollywood elite, professional athletes and other wealthy high rollers a secret.

Given that this is an Aaron Sorkin film, you should expect a lot of dialogue, and he doesn’t disappoint. A flaw for me personally is that all of the flashback sequences are accompanied with narration from Chastain. This accounts for roughly 70% of the film. It wasn’t completely off-putting and did fit the style of the movie perfectly. It’s just not my stack of chips.

Chastain is really good and Elba is even better. Both actors make you buy into each character and see the arguments being made through their eyes and perspective. The chemistry between these two is solid and I would love to see them do another movie together.

Molly’s Game is a solid directorial debut for Aaron Sorkin. It has an interesting plot that’s told well. It has strong dialogue, engaging characters, just enough comedy, and a great performances from Elba and Chastain. It’s ajust bit long but in the end is fun to watch and certainly a story worth checking out.