This review will have SPOILERS !

DC Comics has had the worst time gaining any positive traction with their film making. Still young in the process compared to other universes they’ve only had one film receive overall critical and fan acclaim. Yes their films have all made money, but that never ever means that a movie is actually any good. DC films have been overly scrutinized from the beginning and it appears that the studio, Warner Bros., has completly given in and sold out to try to appease the naysayers. The problem here is that it still didn’t translate well and now the one thing DC could hold onto is gone. DC may have been accused of being too dark and gritty, but at least that was their style and they could own that. Now they no longer can. 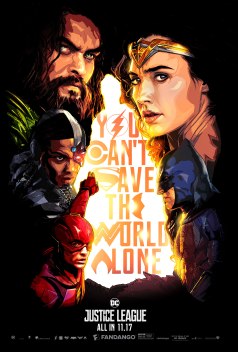 Justice League picks up shortly after Batman v Superman. Superman is dead and the world is becoming more and more evil. Batman (Ben ‘Batfleck’ Affleck) learns that a really big threat is coming and has Wonder Woman (Gal ‘cant take your eyes off her’ Gadot) on his side helping to recruit a team of people with abilities to help fight it. They’re able to bring aboard The Flash (Ezra ‘cant decide if he’s annoying or funny’ Miller), Cyborg (Ray ‘pleasantly surprised’ Fisher) and Aquaman (Jason ‘not the sexiest man alive’ Mamoa) to help fight this new alien attempting to destroy the planet earth.

The plot of this film is pretty standard. An evil bad-ass alien comes to earth looking for a way to destroy and rule it. This villain, Steppenwolf, knows if he collects three mother boxes and joins them together to create one, that they’ll mold the earth in his image and destroy life as we know it. Now a group of superheroes has to find a way to work together to defeat said villain.

It’s a pretty simple premise but as DC likes to do they try to add in some human elements and moral decisions. The biggest decision comes when the team of heroes realizes one of these mother boxes could have the power to bring Superman (Henry ‘named his dog Kal’ Cavill) back to life! The team reluctantly agrees to bring him back and it works. Superman isn’t exactly thrilled to be back alive until he sees the love of his life, Lois Lane (Amy ‘talents being wasted in this role’ Adams). Once he’s on board the team has very little trouble defeating Steppenwolf and saving the world.

OK, is this film entertaining – yes! It is no less entertaining and fun and action packed than your better than average Marvel Studio film. Grab your popcorn, sit back and enjoy. There are fun superhero fights, solid interaction between the heroes and enough heart and emotion to invest you into the characters at least a little bit. Then there’s a heavy amount of comic nerd fanfare that will have even the smallest bit of fanboy in you cheering out loud. The film leads to a beginning of the DC universe and serves as a launchpad for many new characters as well as the continuation of ones we already know!

Here’s is where things get confusing. Naysayers have been begging DC to be more like Marvel. So DC made a very Marvel style film, yet this film still didn’t work for most people. This film made the lowest opening weekend box office of any DC film to date. It has the lowest Rotten Tomatoes score (41%) of any of the films in the franchise.

Zack Snyder was asked to direct this film, which is his third of the DC franchise. His vision for the direction not only of Superman but of the entire DC universe was where Warner Bros. had put their money. Until they stopped.

Warner Bros forced Snyder to make massive cuts to his vision of Batman v Superman causing two totally different films. The better of those two films – Snyders cut. Now comes the tragedy and controversy. Devastatingly we learned that Snyders daughter passed away due to a suicide. The studio announced he chose to step down as director and they brought in Joss Whedon to finish the project. If you recognize the name Whedon it’s because he directed the smash hit Avengers.

Controversy is drawn from the timing of the Snyder/Whedon switch. Many feel the studio used the death of Snyders daughter as a reason to ask him to step aside. The studio needed to get away from his dark and gritty vision and more towards the summer blockbuster Marvel style of comic book film.

The changes are extremely notable. One-liners and some forced cheesy humor are now sprinkled throughout. Not only does The Flash spend the entire film being quirky and possibly funny, but Batman himself starts dropping jokes. Pretty out of character for the dark knight. Next of note may be the sexuality of the film. For all the advancement that the movie Wonder Woman made in female empowerment, this movie took two steps back. Scenes with camera shots from the ground up from behind Wonder Woman that showed just a little butt cheek were now included. The Flash stumbling while using his speed to save her and they wind up on top of each other and his head buried in her breasts. They took the inspiration that came out of director Patty Jenkins’ vision for Wonder Woman and turned her into some ass kicking eye candy.

The plot itself even resembled The Avengers. An all-powerful alien bringing hoards of fighters through a portal onto earth. His goal is world domination. A team must assemble while the leader of the team decides to sacrifice his life for the betterment of the team.

The film even got edited down to under two hours of run time. A movie that needs to introduce four new huge characters while having substance to a plot and while resurrecting the man of steel sounds like at least a three-hour film. Yet this movie got cut down and left many fans wanting more. Easily they could have added twenty minutes worth of substance scenes to help the flow of the film. It wasn’t as confusing as Batman v Superman, but it certainly would have benefited from extra explanations. The changes and alterations that the studio forced upon this film has provided a sour taste in many fans mouths. The catch though is that the film is entertaining. I absolutely loved all the fanboy scenes it treated us too. I love the direction of the DC universe for a lot of these characters.

Justice League by itself is a good movie. It is a lot of fun to watch and you’ll enjoy it. Your minds wont be blown like it would from some character driven drama or Oscar worthy script, but you’ll easily be able to follow along. The direction it projects DC in looks to be a lot of fun and exciting, as long as they stay the course. Sadly, there is very little faith in this company right now to do the right thing.