The 7th season of American Horror Story finished this week, and I have to say this was my least favorite season.

This season’s focus was announced earlier this year as Cult, and a lot of promotional material started showing up with a group of clowns. However, once the season actually came around, the clowns really weren’t even that important to the storyline. I felt like they only used clowns because it is a popular fear, and due to the recent success of It. It was also a sad attempt to use an old fan favorite character, Twisty

, to try to force connect the seasons. Everything doesn’t have to be a shared universe folks! Can’t we just have a show with stand alone seasons? If you have to stretch to find a reason to connect it, it isn’t working. Also, from the beginning, the season was very uneven and all over the place in it’s plot. It started as a very heavy handed commentary on the 2016 election. Ughhh…We don’t get enough of this in our every day lives and on the news? No thanks. I watch TV and movies for escapism, not political views being shoved down my throat. There was also an episode focused on a mass shooting, which aired the week between two real life shootings. Maybe the focus of this season was a little too true to real life. Who wants to watch that and just be depressed each week?

Still, I hung in there since I am a fan of the series and have felt like it really hasn’t had a “bad” season yet. Sure some are more effective/memorable than others, but usually I enjoy the originality and the performances of the recurring cast, and how they are used in different ways each season.

With that said, let me try to point out some of the positives of the season. Evan Peters, one of only 2 actors who has been on American Horror Story every season, gave the best performance of this season. He played cult leader/rising local politician Kai Anderson. He sold the creepiness level, as well as “faking it to make it” as a local elected official. Episode 9 alone, I feel like he should be nominated for an Emmy. He plays various cult leaders through history such as Jim Jones, Marshall Applewhite, and David Koresh. Honestly, if I didn’t tell you, you may not have even noticed it was him. If Peters is the focus of the season, in my opinion, his co lead is Sarah Paulson. Another frequent collaborator of Ryan Murphy, who has also had a prominent role in every season of AHS.

Paulson showed great range, as usual, dealing with her paranoia and phobias early on, to being scarcely in control in the later half of the season.

The other bright spots of the season for me came from supporting characters who were all new to the series. Billy Eichner was one of the characters this year. Sadly he was underused and SPOILER met an untimely end earlier in the season. I only hope that Ryan Murphy calls him back next season for a more prominent role. 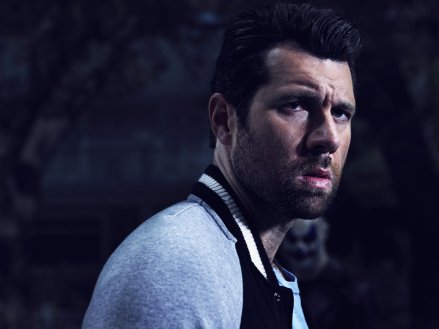 Billie Lourd (daughter of the late Carrie Fisher) showed some real promise as Kai’s sister. I wasn’t really familiar with any of her work before this, so again maybe she will return in future seasons. Chaz Bono was also in this season, which surprised me. Only featured in a few episodes, but if I didn’t bring it to your attention you probably wouldn’t have made the connection to who he was.

Another polarizing part of the season for me was Lena Dunham. I really do not enjoy her work usually, I have not caught on to the Girls craze (I don’t see what’s so special). However, she did a decent job in episode 7 as real life character Valerie Salonas. Although it was another attempt to steer the season towards a historic cult, as well as tying to tie it to the famous serial killer story of the time, the Zodiac killer. It was a decent episode, however I just felt like all these side stories took away from the main purpose of the season, if it had one. That episode was saved by Peters doing a great job as Andy Warhol. However when he arrives later in the season playing a vision of Charles Manson, and talking to his own character of Kai, it lost me a little. I guess it was just trying to illustrate Kai’s own decent into madness, but I felt like the characterization did not ring as true as it did with the other cult leaders he previously embodied.

Overall, I did not enjoy this season of American Horror Story. I felt like the narrative was all over the place, and a little too “ripped from the headlines” for me. If it were not for the quality of the performances, or the fact that I felt compelled to tune in each week to see what crazy tangent they would go off on, I would not have stuck with it. I am still a fan of the series though, and hope Ryan Murphy course corrects for next year. I always look forward to the new roles and performances from some of his frequent stars, as well as seeing what new actors he will bring into the fold.