A good film that will go unnoticed due to a lack of promotion and awkward subject matter. I mean honestly if you think about it, the first 40 minutes of the movie is just a guy trying to talk his wife into a three-some. 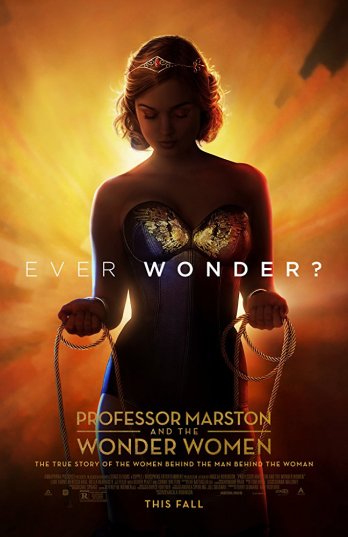 The film follows William Moulton Marston (Luke ‘real life Gaston’ Evans) and his wife Elizabeth (Rebecca ‘you love her in everything she’s in but can’t remember her name’ Hall). Marston was known to be an inventor of an early version of the lie detector as well as DiSC theory. The couple decide to form a relationship with their teaching assistant, despite being a very forbidden thought in the pre World War II era…ok, it’s still kind of a forbidden thought today. Yes, a relationship. Not just one of sex but legit three people in a relationship with each other. Husband-Wife, Husband-girlfriend & Wife-girlfriend all living in the same house and sleeping in the same bed while raising children together.

This unique relationship and Olive Byrne (Bella ‘newcomer’ Heathcote) become the inspiration for Marston’s Wonder Woman. Marston has been pushing his human theories through his teachings for some time now but unable to get them published or recognized. While in the midst of living this insanely unnatural and taboo relationship with two women he has an epiphany as to how he can get his message across. He can create a comic book character and subliminally through the artwork and story telling he can infiltrate the American psyche with his teachings. Unfortunately what winds up being his downfall is the mass amounts of bondage and submissive sexual nature in which he publishes this now popular character. Just as the comic starts becoming a best seller, Wonder Woman is seen as disgusting at first by the media. The agencies that monitor for public decency and child protection champion the cause to have Wonder Woman shut down.

The comic isn’t what this movie is about though. It is about three people proving to the world and to themselves that love can be shared by more than just one man and one woman. What began as lust slowly grew into love and then became more than a relationship but a statement. A protest of traditionalism and a push for love in all forms.

The acting is solid across the board. I enjoyed Bella Heathcote in this. Her humanity is so on display, you can’t help but fall in love with her. She gives the film its heart while she is complemented with a typically great Rebecca Hall performance, she remains quite underrated. The story telling isn’t always strong as the film does spend lengthy time on the development of the relationship. Is it about a guy just lusting after another woman? Does Mrs. Marston really have feelings herself? How did this all of the sudden just become ok when none of the three characters had experimented with any kind of ‘free-love’ before today?

The main strength of the film is its source material. This is a very interesting story. Especially if you love Wonder Woman. The inspiration for one of the most beloved superheroes is rooted in a poly-amorous relationship, that’s fantastic. Overall the acting delivers a credible relationship that by films end you actually believe in. It is also a interesting insight into the backstory of a hero we all know and love. You may never look at Diana Prince the same again.

I recommend seeing Professor Marston and the Wonder Women, especially because you may see this movie during awards season.

Episode 189 starts with a #SnyderCut debate! We review #Lovebirds @pattonoswalt #ILoveEverything & give final thoughts on #Deadtome2 on #Netflix & #UploadOnPrime #RUNHBO had it's season finale #RubyRose is out as #Batwoman & we watched #Stargirl on #CW Also, #Zenimation #Out & #MandalorianDoc on #DisneyPlus Click the link in our bio to listen now!
Week 27 of our #CW recaps is here! The season is almost over, so we discuss the #SeasonFinales of #Batwoman (our final time seeing #RubyRose in the role) & #Supergirl Give our thoughts on the #Stargirl pilot & talk about the latest #LegendsOfTomorrow Click the link in our bio to listen now!
Is once a month not enough Realm for you? Well, if you are a Patreon subscriber,  for as little as $1 a month, you just got a bonus episode! Join Roy as he discusses the final season of The Magicians on SyFy, and then looks back to give his thoughts on the full 5 season run of the series. Www.patreon.com/taketoopodcast Join today for exclusive content!
WEEKLY POLL! With the #news this week that #HBOMax is finally going to #ReleaseTheSnyderCut of #JusticeLeague in 2021 Our hosts are at odds... Whose side are you on? BRIAN - Excited to finally see #ZackSnyder version? TONY - Or have you moved on from a 4 year old failed franchise? Please comment below!
Episode 188 is loaded! We review #Scoob #Capone #LastDance #KIMMYVSTHEREVEREND Give initial thoughts on #Upload #DeadToMeSeason2 & #IKnowThisMuchIsTrue As well as #ReunitedApart #BackToTheFuture #CommunityTableRead #SNLAtHome #MandalorianDoc & #PropCulture Click the link in our bio to listen now!
Our latest #Spotlight looks at the long and diverse career of one of the best and hardest working actresses in #Hollywood @juliannemoore We've been hooked for over 25 years and still get excited to see her name involved in a new project! Click the link in our bio to listen now