I spoke about the first episode of season 3 a few weeks ago on our show and said how I felt like this season wasn’t going to be as good, since two of the lead characters from the first 2 seasons were gone. Boy was I wrong…once I got into it, I didn’t want to stop watching the newest season of Narcos. 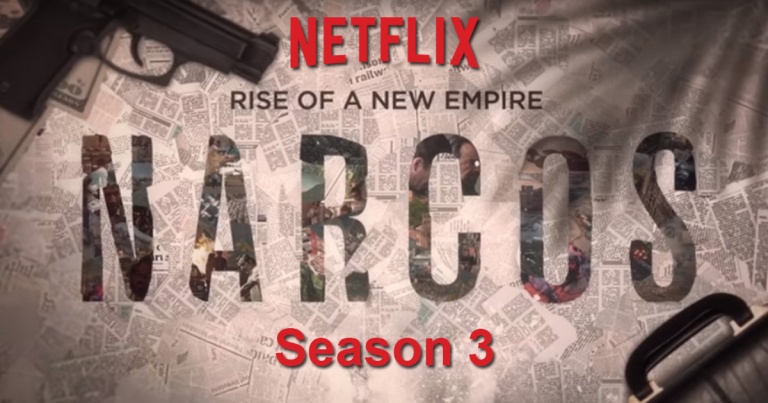 Hopefully you are all caught up, or have heard from the news over the last 20+ years, but Pablo Escobar is dead. So season 3 of Narcos shifts the focus of the bad guys to another Columbian cartel, the Cali Cartel. We saw them a little bit over the previous 2 seasons, as they were operating at the same time as Escobar, but now they have taken over with him gone. The other change this season is Pedro Pascal (Game of Thrones, Kingsman: The Golden Circle) running things.

He was really impressive here, even more so than in previous seasons, now that he is in charge of the DEA operations in Columbia. I also like the choice made by the show runners to drop the voice over narration we got in the previous seasons, It was unnecessary and a little cliché.

The other standout performance of the season for me was Matias Varela as Jorge Salceda. A fairly unknown actor, but he showed a lot of range here as the head of security for the cartel that works with the DEA to hopefully save his family. I look forward to seeing more from him in the future.

If you felt season 2 was kinda drawn out and then anti climactic, come back around for season 3. It really delivered as a one season storyline, with a lot of action and a nice resolution to set up season 4. The sad news there is that since season 4 will have a new location, Mexico, they were scouting for filming locations and a crew member was shot and killed. Very sad situation, but I hope it does not take away from season 4 to be able to deliver another tense story.

Episode 189 starts with a #SnyderCut debate! We review #Lovebirds @pattonoswalt #ILoveEverything & give final thoughts on #Deadtome2 on #Netflix & #UploadOnPrime #RUNHBO had it's season finale #RubyRose is out as #Batwoman & we watched #Stargirl on #CW Also, #Zenimation #Out & #MandalorianDoc on #DisneyPlus Click the link in our bio to listen now!
Week 27 of our #CW recaps is here! The season is almost over, so we discuss the #SeasonFinales of #Batwoman (our final time seeing #RubyRose in the role) & #Supergirl Give our thoughts on the #Stargirl pilot & talk about the latest #LegendsOfTomorrow Click the link in our bio to listen now!
Is once a month not enough Realm for you? Well, if you are a Patreon subscriber,  for as little as $1 a month, you just got a bonus episode! Join Roy as he discusses the final season of The Magicians on SyFy, and then looks back to give his thoughts on the full 5 season run of the series. Www.patreon.com/taketoopodcast Join today for exclusive content!
WEEKLY POLL! With the #news this week that #HBOMax is finally going to #ReleaseTheSnyderCut of #JusticeLeague in 2021 Our hosts are at odds... Whose side are you on? BRIAN - Excited to finally see #ZackSnyder version? TONY - Or have you moved on from a 4 year old failed franchise? Please comment below!
Episode 188 is loaded! We review #Scoob #Capone #LastDance #KIMMYVSTHEREVEREND Give initial thoughts on #Upload #DeadToMeSeason2 & #IKnowThisMuchIsTrue As well as #ReunitedApart #BackToTheFuture #CommunityTableRead #SNLAtHome #MandalorianDoc & #PropCulture Click the link in our bio to listen now!
Our latest #Spotlight looks at the long and diverse career of one of the best and hardest working actresses in #Hollywood @juliannemoore We've been hooked for over 25 years and still get excited to see her name involved in a new project! Click the link in our bio to listen now