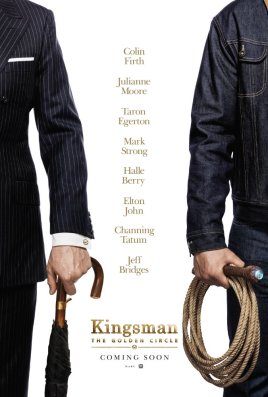 Turn off your brain and you’ll have a blast with this movie. Try and decipher any resemblance of a quality plot or realism and you’ll leave after the first act. The best part though is that this movie doesn’t try and hide from that fact. It simply sets out to entertain you.

Eggsy (Taron ‘I still look only 16 years old’ Egerton) is now one of the better agents working for Kingsman. He and the Princess Tilde (Hanna ‘nobody expected to see your bum at the end of part one’ Alstrom) are now a serious couple. Outside of mourning the death of Harry (Colin ‘will always be Mr. Darcy to me’ Firth), things are going very well for Eggsy, Merlin (Mark ‘makes being bald look good’ Strong) and The Kingsman.

Kingsman is infiltrated by a crime syndicate know as The Golden Circle. Their leader, Poppy (Julianne ‘at one time was the only redhead in Hollywood’ Moore), has eliminated every single Kingsman agent except for Eggsy and Merlin. Now on their own they set out to stop Poppy and her evil plan.

Ok, so the plot is pretty standard so far but now is when it gets exciting. Poppy is the world top supplier of all recreational drugs. If you’ve done a drug, it’s come from Poppy. Her grand plan has been to lace all those drugs with a toxin that eventually paralyzes and kills you. She blackmails the President of the United States (Bruce ‘everyone forgets I played Batman too’ Greenwood) into agreeing to regulate all drugs. Legalize them and tax them, then a large percentage of proceeds go to her. If he agrees, the antidote will be released all around the world and millions of lives shall be saved!

Don’t worry, it gets better. In their travels to the United States to seek help in the fight against The Golden Circle,  Eggsy and Merlin come across the American version of themselves. Not Kingsman, but Statesman! In their possession for the past year they have been harbouring a fallen agent whom they know nothing about. They found him with a bullet to the eye, saved his life and allowed him to recover in their secret facilities. The only catch is this guy has selective amnesia. I really hate when that happens. Any guesses as to whom this ghost from the past could be? No need to worry, this isn’t a spoiler because Colin Firth is in all the promotional artwork and trailers! It’s Harry, he’s back! Once Eggsy and Merlin figure out a way to jog his memory, they set off alongside their new American teammates to take down Poppy and her Circle.

Wait, he was legit dead? Wait, there’s no way she could lace all drugs? Wait, they….exactly!

Here’s the point when you decided if you wanna just kick back and be entertained or grumble over some trivial nuances of the film?

This movie is a “summer blockbuster” genre to an absolute tee. It is really fun to watch. The action sequences and fight scenes will make you smile. Matthew Vaugh has really perfected the art of properly implementing slow-motion into fight scenes at the right moments. The subtle mix of american humor and english actually plays well and the over-the-top characters fit their roles quite well.

The acting is smooth. Julianne Moore looks like she had a lot of fun working on this. Egerton and Firth don’t miss a beat with their chemistry and Mark Strong absolutely dominates some later scenes. The absolute show stealer though is Sir Elton John. He plays himself and is forced to perform all day every day while being kidnapped by Poppy. He delivers solid humor in each scene and then is over-the-top hilarious during the finale.

I really enjoyed the first one and decided to sit back and let this one entertain me. It doesn’t disappoint in that scenario. I may not be sprinting to the theater when part three comes out, but I’m still a fan of the franchise. If you liked the first one, go see this one now!