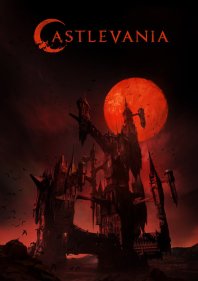 While “Castlevania” does well at so many things, there is one MAJOR downfall that can’t be ignored. After almost a year of anticipation, Netflix has finally dropped their animated series “Castlevania”, based on the extremely popular video game series. Producers Adi Shankar (Dredd, The Grey, Lone Survivor) and Fred Seibert bring to life the story of the Trevor Belmont, slight change from the original Simon Belmont of the original video game, and his quest to destroy Dracula and his army of demons with his whip and short sword. The story line is great, whether you’ve played all the Castlevania series or never even one minute. The animated series is full of back story and intrigue and double crosses and everything else you might see in a good episode of Game of Thrones. It really pulls you in to want to continue binge watching. Within the first episode you aren’t even sure if you should be routing for Dracula or the human race. The voice actors are all phenomenal as well. While you might not recognize them right off the bat, a quick IMDB search will show you that you know most of them. Graham McTavish, Tony Amendola, and Matt Frewer are a few stand outs that once you see you’ll realize why their voice over acting is so well done.

The fight scenes are beautiful to watch. Fast moving and fluid, but not super jerky like I personal feel some anime films are. The gore is also ratcheted up for the show. Way more than I can remember from any of the video games. Each episode has a solid slicing, dicing, and straight up hatcheting of people and demons alike. I’ll admit I was slightly nervous of the show because the animation style was similar to anime, which I am not a fan of. But it was spectacular. Gorgeously done, with every single detail standing out but not exactly trying to mirror real life.

So I’m sure you’re asking, with all of this high praise what is this huge downfall I mentioned earlier. The entire series is 4 episodes. Four 28-minute or so episodes. What the hell Netflix?! I’ll admit I know that animation takes time but as soon as the series starts picking up to more exciting heights, it’s over. Now it has already been announced that a season 2 has been green lit, and I can only hope that maybe we will actually get a full series out of it. This seemed like some sort of prequel tease just to get viewers ready for something bigger. And I hope that’s the case.

You can watch the entire series on Netflix now in less time then it takes to see Wonder Woman. It worth checking out and I really hope we will see more coming in season 2.

One thought on “Castlevania: season 1”