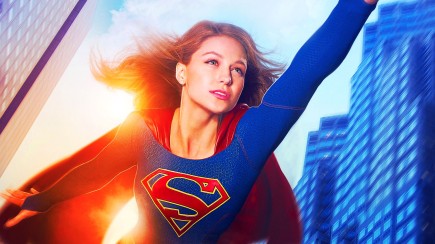 The woman of steel is part of the “Berlanti-verse” on The CW. This year was their first season on the CW after season one was over on CBS. This year offered a lot of fun moments as well as a decent amount of eye rolls.

I watch this show for two main reasons:

Overall the season gave me personally some truly great moments. They introduced Superman! He showed up for the first two and final two episodes and they were fantastic. As much as I wanted Tom Welling cast for the role, Tyler Hoechlin did a solid job with this version of the character. They had legit comic villians such as Music Meister, Mr. Mxyzptlk, Toyman and even a peek at a young Lex Luthor! They introduced Mon-El as a legitimate character and created a solid romance storyline between he and Kara. They also expanded on side characters such as her sister Maggie and her personal life, her friends Winn and Jimmy Olsen and their new crime fighting adventures and a more in depth back story for Jon J’onns.

There weren’t many episodes that missed this season. Each one carried the overall arcing storyline and added elements to the characters well. Supergirl progressed in learning about her powers and how to use them. She further developed relationships between herself and Lena Luthor, the President of the US, her sister, her co-workers and especially Mon-El.

At times the Mon-El storyline felt a little pushed. The show quickly got away from any Jimmy Olsen – Kara romance story and developed one with Mon-El. It made sense to have them explore a relationship based on the fact they were similar style aliens and could be the only people on this planet that truly understood each other. Fans were left with their heart strings tugged in the finale episode as the fate of Mon-El’s life was left in the balance.

Here’s where the show really missed for me. Agenda pushing! Force feeding the “girl power” mantra as well as diversity just became too over the top blatant and stale. Every fight or battle that Supergirl was involved in her sister gave her a dramatic speech about how empowered she has become and what it meant for her as a girl to complete her mission. This horse was beaten to death. At what point could they just accept Kara as an equal and not have to remind her, or the audience, of her desire to be treated as one at least once an episode. It consistently lost me on this “people don’t actually talk to each other like that” style of dialogue. It felt very forced and far too often. The next agenda was the diversity. There will soon come a time when my nine year old daughter learns about homosexuality. In my house personally its accepted. Yet, to have to explain to her in the middle of a comic book TV show why two girls are kissing and calling each other their girlfriends was not something  I or many other parents were prepared to do. For a time when I would have liked to just relax and be entertained with villain fighting superheroes, it is not expected to then deal with educating young kids on awkward social issues. I understand the need to drive ratings and show diversity on our TV shows. For some reason our society can’t handle shows that don’t check off every box of diversity there is. Except why here? Why now? These shows are meant to keep us young. They’re comics and action heroes, not ideal and thought provoking dramas.

Jimmy Olsen becoming a superhero – “Guardian” I could have done without. It felt like the writers didn’t have much of anything for him to do going into this season, so they made him fight crime in a super suit. The absolute biggest disappointment of the season was having both Dean Cain and Teri Hatcher on for multiple episodes yet never just once having them in a scene together. Any Superman and Lois & Clark fans wanted to see this reunion so desperately but we never got it. Finally, one last distaste was a few liberties they took with Karas powers. Prime example was in the final two episodes when she defeated Superman straight up in a fist fight. This would NEVER happen in real life. It would have been so easy for the show to add that he was weakened every so slightly from Kryptonite or such. Yet they chose to drive home more of a need to “confidence boost” Kara by having her beat Superman.

Again, this would NEVER happen in real life. Superman is simply that much stronger than she is. End of Story.

Overall this season went fine. I do recommend watching this show, especially if you’re into the whole comic hero genre. If you can tolerate that bit of agenda pushing the studio sends through this show then you’ll enjoy the characters and their stories very much.