Five Came Back is a fantastic new documentary series on Netflix. It is split into 3 one hour episodes and is based on a book by Mark Harris. I previously reviewed a book of his I enjoyed, Pictures At a Revolution, and I had meant to read this one as well. However, when I saw they made a Netflix series of it, I had to watch it immediately.

The series looks at five famous directors from the late 1930’s that left Hollywood to help the war effort during World War II. They travelled overseas to be with the troops and capture images of war and produce propaganda to convince the people back home why this war was worth fighting. Frank Capra (It’s A Wonderful Life), John Ford (The Searchers), William Wyler (Ben-Hur), John Huston (The Maltese Falcon), and George Stevens (Giant) were all well known directors with commercially succesful and award winning films under their belts. The documentary uses their footage as well as archived interviews to show some of what they accomplished and how it changed them forever.

The film is narrated, sparingly, by Meryl Streep, and features five modern directors who discuss more in depth what each director went through. Steven Spielberg (Jurassic Park), Guillermo Del Toro (Hellboy), Francis Ford Coppola (The Godfather), Paul Green grass (Untied 93), and Lawrence Kasdan (The Big Chill) all use their expertise to look back on these men they consider role models, and examine the sacrifices they made for America.

Netflix has the original 13 documentaries these directors made that are discussed in the film. Some have some very intense images that will burn into your memory. They feature real battle footage, and the first images filmed inside a Nazi concentration camp. The second episode focuses on some of the racial issues of the time, such as black soldiers and what they experienced while fighting. Also, the way we depicted the Japanese in order to make them seem like a lesser race to convince people they were the enemy. The third episode shows how they were ahead of their time with looking at the after effects of the war on these soldiers, what we call PTSD today. 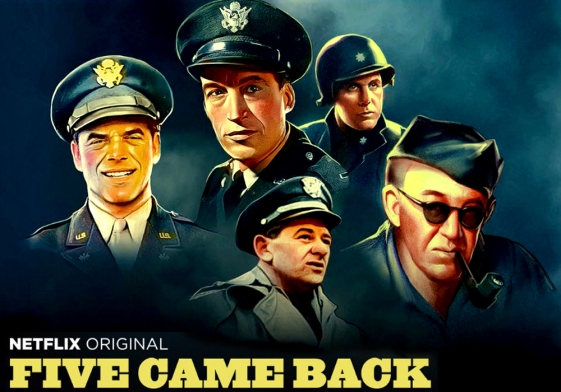 These five directors gave up an important time in their careers for the war effort and came home changed. Some suffered physical and mental challenges after what they went through. This series really did a great job of examining those challenges and making you feel the utmost respect for these men. If you like stories of old Hollywood, or war history you will find this series utterly enthralling.