This was the best Kong movie yet! The effects were great, it jumped right into the action, and had some decent comedic moments, mostly from John C. Reilly. I also enjoyed the soundtrack, a lot of classic 70’s rock since it was set in the Vietnam War era. Samuel L. Jackson and John Goodman, as usual, did not disappoint. The acting and script aren’t the reason to see a movie like this though, you know what you’re getting going into it. This will not be an Oscar winner for acting or screenplay, but it was just great fun. Seeing Loki (Tom Hiddleston) and future Captain Marvel (Brie Larson) working together also gave me a nerd chuckle.

I was just glad to finally see a different take, not just Kong falling in love with a blonde, white woman and chasing her up a tall building, only to fall to his death. Go check out Kong, it embraces the B movie and does it well. Also, I have high hopes for where the MonsterVerse will go from here…P.S. stay for the post credits scene.

This movie needs no introduction whatsoever. Since 1933 there have been no less than 7 movies made of this giant gorilla. Scientists, along with a military escort, go to an uncharted Island to perform “scientific seismic studies”. Within minutes of arriving, they encounter the King of the Island known as Kong and the action is non stop from there. While most of the team is trying to get off the island, one is hell bent on destroying the beast. There are also other creatures that wreak havoc on the team and Kong. The action scenes are spectacular and the visuals are stunning. I truly enjoyed seeing Kong in 3D. Be sure to stay for the post credit scene for an insight on things to come ! 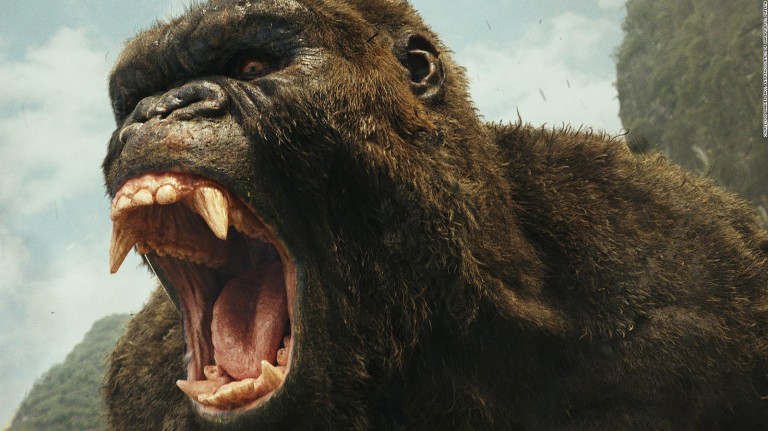 So like all things in hollywood land, things come around again and again, and the giant monster movies are no exception. Kong Skull Island is a great addition to the giant monster movie family. So here’s my take on Skull Island. First thing, I like how they got to it, there was no tease and you know what this is, an earth shattering, rock crushing action film. The plot was straightforward, and the acting was pretty decent, and there was enough comic relief to ease the seriousness of the story overall. I went into this movie with certain expectations and I have to say I was not disappointed. So I’ll give Kong Skull Island a 71/2 out of 10.