In my continuing mission to review all the Oscar nominated documentaries for 2017, I watched the Netflix original “13th” and have written up a synopsis and review below.

“Neither slavery nor involuntary servitude, except as a punishment for crime whereof the party shall have been duly convicted, shall exist within the United States, or any place subject to their jurisdiction.” 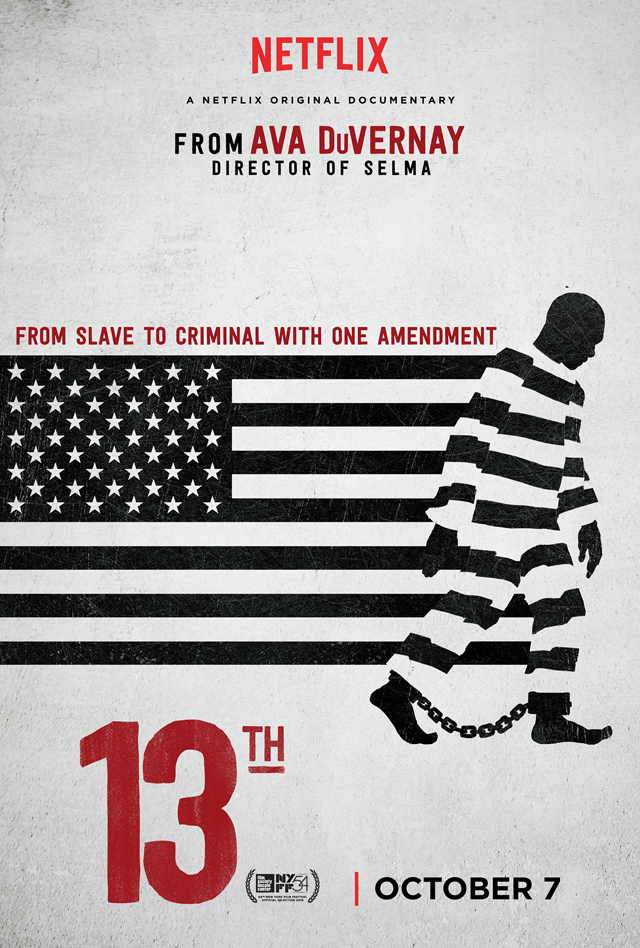 This is the 13th Amendment to the United States Constitution and it essentially abolished slavery throughout the country.  Netflix’s documentary film “13th” however presents the ideology that inequality in the judicial system, particularly the American prison system, has essentially replaced slavery.  While the United States is only 5% of the world’s population, we account for 25% of the world’s prisoners. These, and other facts throughout the film, are staggering to hear.  For instance, 1 out of 3 black men will be imprisoned at some point in their life in comparison to 1 out of 17 white men.

The film tells the long and storied history of how the loss of slave labor with the passing of the 13th Amendment debilitated the South and how the prison system was used to try and replace that labor.  The vilification of black population through films like “Birth of a Nation,” Jim Crow laws, the war of drugs, and mandatory minimum sentencing is discussed by many African American scholars, leaders, and government officials.  At each turn where something was passed to “help” the black population, the government often introduced new legislation that would bring them back down.  “13th” covers history all the way up to current times with the Trayvon Martin shooting and the 2016 political candidates.

“13th” is a tough film to review, so I’m going to do my best here to not offend anyone.  It CLEARLY has a political point of view and agenda that they want the viewer to side with.  While this is often the case with most documentary films, it was a little upsetting to me how obvious it was this time.  The overlaying of Trump speaking while they showed images from the 1950s black people getting harassed and beating I thought was a little much.  No matter what your feelings are about the then presidential candidate, that seemed a step too far for me.  However, the entire film was beautifully done.  All of the interviews and archival footage was amazing to see and hear.  The director of the film, Ava DuVernay who also directed “Selma” did a great job putting the entire thing together.  I see why it was nominated and would not be surprised if it won, especially with how often the Academy likes to side with certain political agendas. No matter what your viewpoint is on the subject, I think “13th” is an important film for everyone to watch.  You may like it or you may not, but it needs to be watched by everyone of all races.