Holy adjusted timeline! The butterfly was in full effect and this show was certainly on flashpoint. Who would of thought a little ham-radio could change so much? 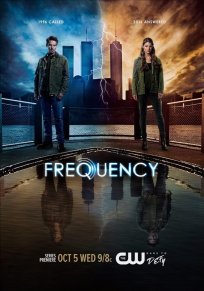 Jeremy Carver creates this CW network show that keeps you curious from start to finish. An adaptation from the 2000 film that included a few tweaks allowing it to play better for television. Peyton List plays Raimy Sullivan, the daughter of a murdered NYPD cop who one lonely night discovers her dads old ham radio still works. An NYPD cop herself now in 2016, she investigates only to learn that the radio only contacts one person – her father! Through the mystery of a bolt of lightening Raimy is now able to speak to her dad back in 1996.

After saving him from being murdered Raimy and her father Frank Sullivan, played by Riley Smith now team up to stop New Yorks most notorious serial killer of all time – The Nightingale Killer. In their efforts to stop him they alter the timeline which results in Raimys mother Julie Sullivan, played by Devin Kelley, being killed!

The entire plot of the show revolves around the two now undoing what they’ve done. They need to save Julies life while trying to catch or maybe even kill the Nightingale Killer.

Enough plot line for now, you’re going to have to watch the show for more. I really enjoyed the show. It keeps you guessing throughout, even after we learn who the killer is. The subplots of Raimy having a fiancé and dirty cops trying to kill Frank don’t distract you, but add to the show. Mekhi Phifer rounds out a solid cast that each plays their roles convincingly. I fully expect Peyton List to benefit from this show and book plenty more work. She reminds me of a mix between Sandra Bullock in Speed and The Net.

Sadly the news surrounding the show is that ratings were just a bit low. Apparently me being the only viewer wasn’t enough to get it renewed for a Season 2. The good news for you is that it is being moved from the CW network and onto Netflix. Now everyone can, and should binge watch this fun thrama (that’s a thriller and drama combo) to help it get a season 2 booked!

I give the overall season a 7. There is a myriad of multiple timelines that can get a little off-putting, but the overall theme of the show carries you to the end.

One thought on “Frequency season 1 review”

We are participating in #PodcastBlackout this week Please listen to our quick personal message. Be kind and respectful to others and let's focus on making our country a better place during this difficult time. #TheShowMustBePaused
Check out the latest episode from #TheRealm Covering the #seasonfinale of #Charmed & the #ChroniclesofNarnia episode of #PropCulture Looking ahead to #ArtemisFowl & looking back at a favorite show from the past #Angel Click the link in our bio to listen now!
This #Spotlight looks back at 2 #comedy #icons that were taken from us too soon #JohnCandy & #ChrisFarley Bittersweet, yet it feels good to look back on 2 great #actors that starred in some of our favorite #films from childhood. Click the link in our bio to listen now!
#TakeTooClip Is this the end of our show?!? Does our ‘discussion’ about #zacksnydersjusticeleague create a #civilwar ?!? Listen to Ep189 NOW to find out! We also review #Lovebirds #deadtome #upload and more! https://podcasts.apple.com/us/podcast/take-too-podcast/id1167588133
WEEKLY POLL #HBOMax has arrived! What are you most excited to watch on this new #Streaming service? #Friends #FreshPrince #HarryPotter #DCEU #DoctorWho #TCM #StudioGhibli #LooneyTunes Please #Vote #Comment below and give any other choices you're looking forward to!
#TakeTooQuickReview #TheLovebirds  now available on #Netflix! Brian’s thoughts here on our #YouTube channel! Full convo between Tony & Brian on Ep189 of our #podcast Subscribe today! youtu.be/SZEM7Uq5BRc