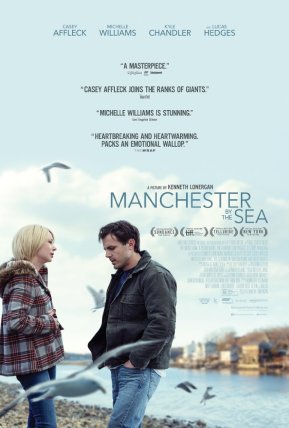 A story about a man put into a situation he wants desperately to avoid. A story about death in the family and facing your demons. A story bound to make you cry just a bit and go home to hug a loved one. A story that’s also not entirely intended to have a point to it.

Casey Affleck delivers an absolutely brilliant performance. His brilliance lies in his subtle demeanor. The range of emotions his character goes through, as shown by flashbacks, gives you the grand range that Affleck can perform. The more we learn about the type of man his character used to be versus the man he portrays now really makes you appreciate his performance throughout. Affleck is well deserved of any accolade and award he receives, he truly carries this film.

Other performances are solid if not note-worthy. The emergence of young Lucas Hedges is refreshing as his portrayal of a moody teenager comes off exactly like a moody teenager. It should be noted that you can forget he is acting at times, which speaks greatly to his performance.

Michelle Williams has two overly emotional scenes, the second of which was actually off putting. In a moment of devastation and revelation between her and Affleck she turns into a blubbering mess. Unfortunately there’s a little too much blubber and she comes across difficult to understand.

The theme of the film is one man facing some impossible inner demons. Your heart breaks for the situations he is put in; but often are reminded that they are the result of his own poor choices. The performance by Affleck is truly great while Williams and Hedges are memorable. If only to see quality acting I’d say go see this film. Otherwise it will do nothing but make you sad without an inspiring uplift to send you home with.